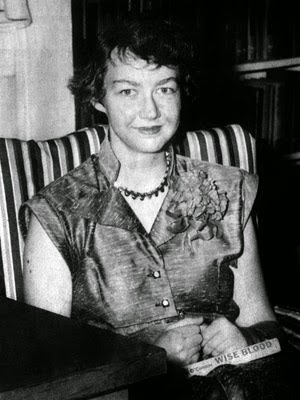 Flannery O'Connor died 50 years ago yesterday, on Auugst 3, 1964. Born in Savannah on March 25, 1925, she spent most of her life in Milledgeville, Georgia where she wrote two wonderful novels and some of the best short stories in the English language. She died far too young of complications from Lupus. She was only 39 years old.

I first read O'Connor in 1962, when my senior English teacher assigned one of her stories, "Good Country People." Even at 17 I had read a lot of good fiction, including many short stories, but I had never read anything quite like this odd tale. I ended up reading it at least four times in one evening, wondering why I was being asked to read about these strange, back woods Southerners who seemed so unlike any people I had ever known, certainly not at all like the people who lived in our suburban New York town. Believe me when I say that I had never encountered an evil, or even a good, door-to-door Bible salesman. No one like that ever came knocking in Larchmont. Neither had I ever come across an atheistic, one-legged woman with a PhD in philosophy who lived on her mother's farm. Gradually, though, as I re-read the story, I came to recognize bits and pieces of myself (and others) in each of the characters and began to understand that rural Georgia was merely the setting for a wonderful story about the reality of the human condition. I was hooked, and thus began my love affair with Flannery O'Connor and her work.

If you haven't read her, do so. She wrote 32 well-crafted short stories, each meant to be savored and slowly digested. Her two novels, too, are masterpieces. Here are some links:


The Complete Stories, by Flannery O'Connor

The Violent Bear It Away, a novel by Flannary O'Connor

The Habit of Being, Letters of Flannery O'Connor

I've included the last, a collection of her letters, because it's by far the best and most interesting collection of letters I've ever read.


Dear Diane and I have made the pilgrimage to Andalusia, her home and family farm in Milledgeville, on several occasions and always enjoyed it. Here's a photo of the house in Milledgeville:
...and another of her childhood home in Savannah: