Almost fifty years ago, it what now seems to be another lifetime, I was a young naval officer, a flight student in Pensacola. Three of us, all happy bachelors, had rented a house – well, it was really a hovel, but it had three bedrooms and cost us only $85 a month, total. You can imagine what it was like.

One hot summer day, since I was scheduled to fly that night, I decided to take an afternoon nap. I was awakened by a near-deafening noise, like nothing I’d heard before. Not only had my little world turned noisy, it had also turned dark. I was sure I’d overslept and thought of all the trouble I’d be in if I missed my flight. But the roaring outside my window pushed those thoughts aside; I ran to the door and walked onto our front steps to see what was causing it. 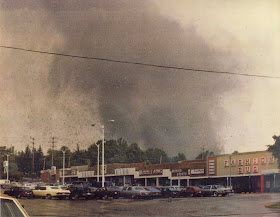 It took only a second. A tornado, black and ominous, was just a hundred yards away. As it moved along the next street, it overturned cars and trucks, sent huge chunks of debris flying into the air, and sparked electrical fires. I stood on that step, frozen, my eyes locked on that funnel cloud only a block away.

At that moment I realized there was nothing I could do, nowhere I could go. Our little hovel offered no protection. I could not save myself. And so I did the only thing I could do. I just stood there, and asked God to keep me safe, to save me from the storm. In a minute it was gone – and in that sudden silence I thanked the Lord for His mercy. It was then, too, I realized I was soaked to the bone. I’d been standing on the front step and hadn’t even noticed the torrential rain. Fear can do that to you.

I know I experienced God’s voice in the silence that followed. God speaks to each of us, but to hear His voice in the storms and the quiet of our lives, we must listen, just as Elijah listened.

Fleeing Ahab and his wicked queen, Jezebel, and fearing for his life, Elijah, God’s prophet, was led by the Spirit to God’s holy place, Horeb, or Sinai. He entered a cave there, and in the darkness awaited God’s word. But God called him out of the cave and Elijah found himself in the midst of nature’s devastating power: a fierce tornado-like wind, then a destructive earthquake, and finally a fire. 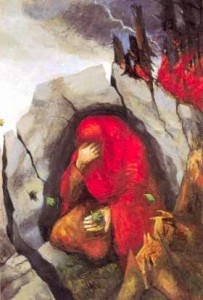 But in none of these did Elijah hear the Lord; and so he waited. And in the silence he heard “a tiny whispering sound,” [1 Kg 19:12] the voice of God speaking to him. God, who controls the entirety of creation in all its majesty, revealed Himself in humility, in peace, in a gentle breeze revealing the whisper of His own heart.

And what did Elijah do? He “hid his face” [1 Kg 19:13] for he knew He was in the presence of God. He hid his face because in Elijah’s time God had not yet become man. The world would have to wait hundreds of years for that. Until then God, in His person, remained hidden.

And yet, Elijah’s encounter offered a foretaste of the Incarnation, the self-humbling of God, who chose to enter the world like a whisper in a stable in Bethlehem

…who, though sinless, allowed Himself to be baptized in the Jordan

…who offered Himself as victim to be tortured, crucified on the Cross by the very ones He created.

Yes, the more God humbles Himself, the more He reveals His love and who He is. And He does so most often in the silence of our lives. My father used to ask, “How much do you learn about the other person when you’re talking?” The answer, of course, is “not much.” This applies as well to our prayer.

Brothers and sisters, God wants to reveal Himself to us, but He doesn’t force it. He simply calls us. He calls us to a relationship through prayer. Prayer is simply a conversation, a dialog with God, in which God speaks and reveals, and we respond. We must listen in silence, listen to God’s Word, and recognize His voice, the “tiny whispering sound” that will penetrate our very souls, if only we let it.

We see this as well with Peter, who like Elijah also had a stormy encounter with God. Jesus had been on the mountain in communion with the Father; then in the darkness He came down to the sea, and walked upon it.

On that same stormy sea the apostles, tossed about in their boat, were afraid. When they saw Jesus waking toward them in the midst of the storm and gloom, their fear was magnified. It must be an apparition, a ghost. They saw, but did not recognize Jesus. Only when He spoke, only when they heard His voice, His Word, did recognition come.

And what did He say? “Take courage, it is I; do not be afraid.” [Mt 14:27] The Greek phase, ego eimi, can be translated as “It is I”, but in the original Greek it means “I am.” And these two words take us back to God’s revelation of His name to Moses at the burning bush: “Tell the Israelites I AM has sent me to you.” [Ex 3:14] Jesus, then, revealed His divinity through His domination of creation by walking on the stormy sea, and through His Word: “I AM.”

But as usual the apostles doubted. Yes, their faith, like ours, was often weak. It’s a weakness that reaches its peak on Calvary when they hid, unwilling to recognize the Lord in that place of fear. Is it any wonder that, again and again, Jesus told them, as He tells us, “Be not afraid”?

On the water, Jesus spoke as He moved toward them, closing the gap, the huge gap that had always separated God from man. No longer must we hide our faces. No longer must we fear His presence for He calls each one of us into friendship, into a sacred, personal relationship. But that day, on the water, this was not yet evident.

What does Peter do? In his boldness, he challenged the Lord. How often you and I are like that, weak in faith we challenge God, looking for some quid pro quo: “Okay, God, prove yourself to me. Do this, Do that.” In effect Peter said, “If it’s really you, let me walk on the water too.”

Jesus uttered only one word, the word He says to all of us: “Come.” [Mt 14:28] Come. Come to me and I will ease all your burdens, remove all your fears. 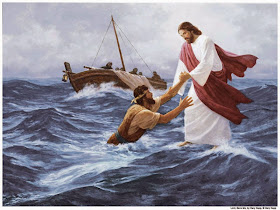 Peter responds and in faith steps out of the boat. But then, as we so often do, he allows fear to dominate his faith. He turns from Jesus and sees instead the wind, the stormed-tossed sea, and in fear and doubt he begins to sink. Now, with a name like Peter – “The Rock” – I suspect he sank rather quickly. But Peter, the man of emotion, doesn’t hesitate and overcome by fear speaks the words we so often cry out in our own failures of faith: “Lord, save me!” Jesus, of course, responds at once. He reaches out a hand and grasps Peter, pulling him to safety.

Now, I didn’t encounter God in that Pensacola tornado; no I saw only a storm, nature unleashed thanks to original sin. But like Peter I called out to God, and like Elijah I encountered God in the silence.

But the next morning I wandered over to the scene of destruction on Jackson Street; and It was there I saw God. I saw Him in the hundreds of people who volunteered to help their neighbors whose homes and businesses had been hammered by that storm. They cleared debris, brought food and clothing, and ministered to the victims in every way imaginable. It was in this selfless work, in this manifestation of love for one’s neighbor, that God’s quiet voice could be heard that day in Pensacola.

God is always there, calling us – “Come…and I will reveal my will for you.” – We need only listen.