Do Bats Get a Bum Rap?

I've been thinking a lot about bats lately, not baseball or cricket bats, but the kind of bats that fly in the night...you know, the scary kind.

Why my sudden interest in bats? Because we're housing them, right here in our wonderful retirement home in Central Florida. Some time ago, while walking our dog, Maddie, in the pre-dawn hours, I noticed quite a few bats flying near our home. "Bats! How interesting," I thought, naively. Sometime later I saw quite a few of these flying critters circling over our home and began to suspect something perhaps less innocent was taking place. Then, a few days ago, I found a dying bat on our front walk, quite close to the door. I put the poor creature out of his misery and called our pest-control company who informed me that, "Yes, we take care of bats."

They sent one of their inspectors, a lovely young woman named Natalie, who climbed up into our attic. I remember her first comment, "Oh, yes, I can hear them."  Much of our attic is pretty much inaccessible unless you're determined to crawl around in darkness and heat. I'm not. Natalie was. She then inspected our roof and eaves for entry and exit points. Natalie must love her job because that roof inspection took place during a torrential downpour. She took photos in the attic and showed me the extent of the infestation. Let's just say we've been housing a lot of bats, rent-free. I should have asked for copies of the photos, but I really didn't want to see them again.

I also learned that bats apparently have constitutional (or at least, legal) rights. Here in Florida, we may not bother them during certain times of the year, presumably during mating and birthing seasons. Fortunately, that's behind us so the bat eviction will begin on October 3. Sadly, it's not an inexpensive process since it includes evicting the bats, closing off all entries and exits, and cleaning and sanitizing our attics.

Anyway, this got me thinking about bats, something I'll admit I've rarely done before. I call bats scary because, well, they are. I consider bats, as I consider some of God's other creations, and find myself asking, "Why?" Why did He make sea snakes, or brown recluse spiders, or mosquitos, or rats, or a host of other similar creatures I've encountered over the years? I can't help but think the earth's eco-system could still survive well enough without these rather pesky wild things running, slithering, or swimming about. Of course, I'm likely wrong about this since God certainly knows what He's about, while I on the other hand have a near lifelong history of getting most things wrong. I'll accept, then, that bats are not the result of some sort of divine accident, since such a thing is impossible.

There's no need, therefore, to lecture me on the natural beneficence of bats. I too have watched those TV documentaries and realize bats do some good things. They pollinate plants, especially fruits, eat lots of insects (including mosquitos), eat other little nasty creatures, and do most of it in the dark while the rest of the flying world, except perhaps owls, sleep. They've even inspired many technological advances due to their rather remarkable echolocation capabilities. 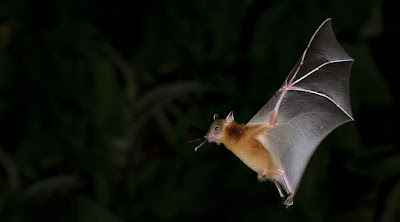 Yes, bats do some good things, but they're still scary. I think their scariness stems from their general makeup.

First, they're creatures of the night, rarely an acceptable trait. Criminals do their best work at night, for the hours of darkness provide cover for nefarious deeds. And many predators, including those we fear, do their hunting at night. I suppose we project our human tendencies and pigeonhole most creatures of the night, assuming they're up to no good. After all, if you're making your way through a dark forest or jungle, and you realize you're being stalked by a large, hungry predator, it's little consolation to know that it's all part of nature's way. Being eaten is never good for the eatee.

Bats also seem to deny natural selection, presenting us with a kind of freakish hybrid, a half-mammal, half-bird creature that shouldn't exist. Yes, I know, they're not half-bird but are simply mammals with wings. But I expect many people -- and I'll admit the thought has crossed my mind -- consider them nothing more than flying rats. After all, the very words, bat and rat, are way too similar. Coincidence?

Of course, Bram Stoker did little to help the reputation of bats when he published his novel, Dracula, in 1897. Stoker, in his novel, coupled bats with vampires, in particular with Count Dracula of Transylvania. I suppose Stoker could have coupled vampires with any animal he chose, but, really, bats are absolutely perfect. Indeed, the vampire bat, a species that drinks the blood of other animals, actually exists. As you can see in the below photo, these truly are scary critters. 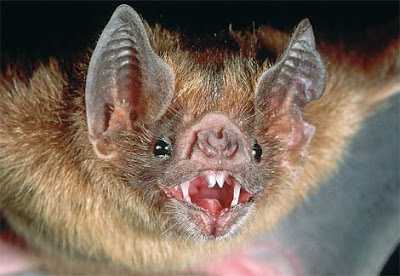 Anyway, by next month I trust bats will be behind me, far behind me, letting me focus on happier, less scary thoughts.
Deacon Dana at 3:24 PM
Share