A follow-up to yesterday's rant about bats in our residential belfry...

Today, after the 8 a.m. Mass, as I was standing in the narthex saying goodbye to parishioners, one of my Bible Study regulars approached me and said:

"Read your blog last night, about the bats, and wondered if the Bible says anything about bats. Do you know?"

"Don't eat them," I replied. "I think that's the only bat reference in Scripture, but I'll check."

This happens far too often. My Bible Study participants -- and we now have 100 or more -- are always putting me to work. They assume I'm some sort of Scriptural scholar, which I certainly am not, and think I can just rattle off passage and verse.  In fact, the older I get, the harder it is to remember pretty much anything. I not only forget basic facts, as well as passages I once knew by heart, but I also forget that I even once might have known them.

Anyway, I was aware of several references to bats in the Torah, certainly in Leviticus, but also in Deuteronomy. I had a fuzzy recollection that both addressed the fact that bats were considered "unclean" and should not be eaten.

When I got home, I decided to see if I were correct and checked out the relevant references. Here's what Leviticus has to say:

I found it interesting that the bat is listed last among the "birds." I'm sure Moses and Aaron realized the bat isn't a bird. After all, one look at a bat and you can see it's a mammal. But because it has wings and flies it probably seemed to fit this category better than any other.

Deuteronomy also addresses the fact that bats are unclean; indeed, the passage is almost a verbatim repetition of the passage from Leviticus:

"You may eat all clean birds. But you shall not eat any of the following: the griffon vulture, the bearded vulture, the black vulture, the various kites and falcons, all kinds of crows, the eagle owl, the kestrel, the long-eared owl, all species of hawks, the little owl, the screech owl, the barn owl, the horned owl, the osprey, the cormorant, the stork, any kind of heron, the hoopoe, and the bat" [Dt 14:11-18].

Once again, the bat is listed last, right after the hoopoe, whatever that is.

Okay, I couldn't just let it ride. I had to check out the hoopoe. Here's a photo: 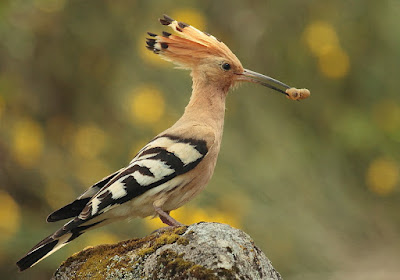 ...an odd-looking bird. Probably doesn't taste like chicken…maybe that’s why it's unclean.

...back to bats. I thought these were the only two Scriptural bat references...but I was wrong. There's another, from Isaiah 2. I've probably read these words 100 times, but just never captured the bat reference in my aging brain. Here's the passage:

"Then human pride shall be abased, the arrogance of mortals brought low, and the Lord alone will be exalted on that day. The idols will vanish completely. People will go into caves in the rocks and into holes in the earth, at the terror of the Lord and the splendor of his majesty, as he rises to overawe the earth. On that day people shall throw to moles and bats their idols of silver and their idols of gold which they made for themselves to worship" [Is 2:17-20].

The words are a portion of Isaiah's prophecy describing the Lord's Day of Judgment." It is the day of God's glory and its effect on all people. Earlier in this same chapter we read those famous words:

"They shall beat their swords into plowshares and their spears into pruning hooks; one nation shall not raise the sword against another, nor shall they train for war again" [Is 2:4].

The fact that bats, along with moles, will be recipients of now useless idols of silver and gold doesn't add much to their stature. But the reference fits the situation, since "people will go into caves...and into holes," exactly where one might encounter bats and moles. At least God has given them a well-defined purpose on His glorious Day of Judgment, and by fulfilling that purpose, they serve Him. Let's pray that you and I do the same.

I think I'm beginning to like these critters a little more...but I still want them out of my house.